Toast, It's not just for breakfast anymore: The Man Who Sold the World (or Carter via Bowie)

The Man Who Sold the World (or Carter via Bowie) 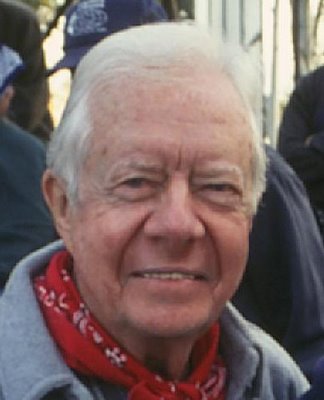 You are currently face-to-face with the man who sold out the world. In 1977, he began the yardsale. Our economy already in trouble, he put it into death throws. By the time Americans kicked him out on his butt 4 years later, he had worked inflation up to 14%, and house loans were an astounding 21% or more! Yes, he singlehandedly destroyed the economy of America. But he didn't stop there.

He didn't allow the first Islamic state to appear on the landscape. He caused it. Much of the current problems the world has with islamofascism can be attributed directly to Jimmy Carter. And when the islamofascists kidnapped American people, what did Jimbo do? His first idea was 'appease'. Amazingly, that didn't work (imagine that!). Still, he kept trying, that being his only method for dealing with thugs.

Finally after a year of this humiliation, he was forced to move to a military option. But he took care to make sure the operation was small enough that it would fail, resulting in further humiliation to our great nation.

Thank God for Reagan. He undid most of the damage Jimmy Carter caused in only 3 years. He gave Americans a reason to be proud again. Not even 1 day in office and the islamofascists gave up their prisoners. They knew Reagan wouldn't take that **** for even a day. And they were right, he wouldn't have. Everyone who is religious please say a prayer for Ronald Reagan. He saved America, and not many days go by that I don't thank him for it.

But Carter isn't done yet. He's still trying to hurt America to this day. As we know, Carter is the man Clinton sent to N. Korea to resolve the nuclear issue. We all know how peacy happy joy well how that turned out. It was perfect! Except of course they have the bomb now. Way to go Carter. Even today, after his cataclysmic destruction of the national economy, he's offering Bush economic advise!!!! Yes, you heard me right. It's all here in his Der Spiegel interview. Still selling out America, almost 30 years after he was booted out of office.

Maybe I'm being too hard on Carter. You say "he's old, so should be given some slack. He did some good things building houses and such." Screw that. He's either evil or stupid. It doesn't matter a whit which one. Neither deserve a place in the American political landscape. The small good he did building houses for poor people does almost nothing to detract from the damage he did to our great nation. He is, without doubt, the worst President America has ever had. Not content with that distinction, he's decided to become the worst ex-president America has ever had.

Update: Sister Toldjah is not a fan of President Carter either.