Toast, It's not just for breakfast anymore: Colorized NYT

In a surprise move today, the New York Times announced that they would be adding color to the newspaper in an attempt to boost sagging sails.

At the press conference, I talked to Paul Krugman (NYT editorialist, chronic BDR sufferer) about the reasoning behind putting islam crescents into the logo. Especially since this comes only a day after the NYT handed classified information to Al-Quaeda, that will help them stay below the radar. "No, no", he said, "of course we are big supporters of the Religion of Peace, but we do not support terrorism in any shape or form. We just really hate President Bush. And so do terrorists. It's one of those 'enemy of my enemy is my friend' deals. Anyway, those crescents have always been there, it's just easier to see with color. Isn't the color great?"

Update: Michelle Malkin is having a photo contest over the NYT's latest dastardly deed. Count me in! 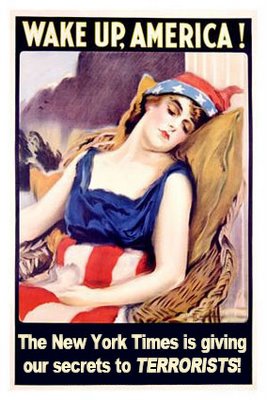 I called up the NYT today and cancelled my subscription over this latest act of terrorist assistance. The guy said, "But you don't have a subscription to the New York Times!" I didn't care, and told him to "Cancel it anyway."

Update II: Tom Elia of The New Editor has an interesting take on this as well.